Again, there hasn't really been much happening.  There was a lot of angryness while leading up to inspections, part of which came about from the simply not being told what the procedure would be, and being given the indication that a private inspection was in-place of a PCI (WTF?).

Eventually we booked the inspector to come in, but it was a 2 week delay due to the timing, and being told last minute that it could be done.  A lot more prior planning and notice would have been more appropriate, and would have meant we could have arranged inspections much sooner.

During the first inspection most of the items found were minor - the only particular major things were batts missing from the roof and sarking having been cut through; other things that need some re-working were robe rails not being level (so doors return to the center), scratches on glass windows, cornices being cracked, oil stains on carpet, paint marks on floorboards, door handles being loose, a couple of two-way light switches needing reversing - nothing too major.
If anything, the most major thing I'm not too happy about is how the CAT6 return points have been installed - on to two face plates.

We only noticed in the second inspection that a CAT6 point is completely missing - we've missed it all along, and only just noticed it just as we were finishing up.

Hopefully more soon, maybe with some pics.
Posted by tjsr at 4:08 PM 1 comment:

The updates - they just don't exist!

You see the volume of updates I'm posting lately?  Yep, that's about the same amount of info I'm getting.

Believe me, I'm far from impressed.
Posted by tjsr at 1:20 PM No comments:

And then the calls stop.

I realise it's been a long time since any updates have been posted.  Main reason for that is that any change from this point has been minor - they seem to be moving at a rate approximately resembling fitting one tap per day, or something to that effect.  It all adds up, but yes, we've only just got some render done on the front, and a driveway has now gone in.

So here's the latest progress shot: 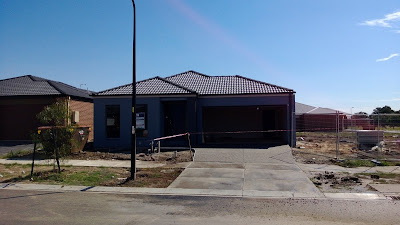 Actually the other reason for lack of information is because that's exactly what they've been providing me - a fortnight ago I didn't get a weekly call from the site supervisor, and then last week I didn't either - making it three weeks since I'd heard from them.  So I called them, and they had very little to really say.  Also tried contacting my person at head office - nothing.  No replies, no returned calls or emails - I really have no idea what's going on.

When I did manage to briefly speak to the supervisor they still won't give any hints on a handover date, and it doesn't look like being before Easter, which will push it out even further.  Oh, and despite somehow managing to keep the crossover intact for the entire build process up until this point, when do they manage to put a nice pothole in it?  Yeah, when pouring the driveway.  Good going!

So right now it's getting rather frustrating being told very close to nothing.

Oh yeah, and fencing guy?  I approved/paid for the fence on the left to be done some time in January, I thought it was supposed to be done by mid-late Feb.  As you can see, there's no fence - but he's also completely dropped off the radar.  No returns to emails, phone calls, nothing - he was supposed to be chasing up the other neighbours to get permission to put fences up.  Haven't heard anything back on that either.  IT's basically like he too has dropped off the face of the planet.
Posted by tjsr at 9:01 PM No comments:

The fences are down!

Fences have come down around the construction site - not long to go now, it would seem.
The update yesterday told me we're looking at the following timeline for various bits and pieces:


Of course the actual PCI date could be months away :(
Posted by tjsr at 1:56 PM No comments:

A little while ago they started with the carpet in some of the smaller rooms, but since then haven't really made too much progress.  As such the study and bedroom 2 have been carpeted, but bedroom 3, the hallway and the master beedroom are still solid concrete.

Some time between Wednesday and Sunday though they've been in and laid down all the floor boards, so now from the hallway to the back of the lounge room it's all timber looking.  Unfortunately when I got out there on Sunday night it was getting quite dark and reflective, so no decent photos to really be able to post.

Painting still needs to occur in the master and lounge room, doors still need to go on in bedroom 3, and the Hebel fixed up on the front façade.

Other than that though, it's mostly getting there.
Posted by tjsr at 10:19 AM No comments: 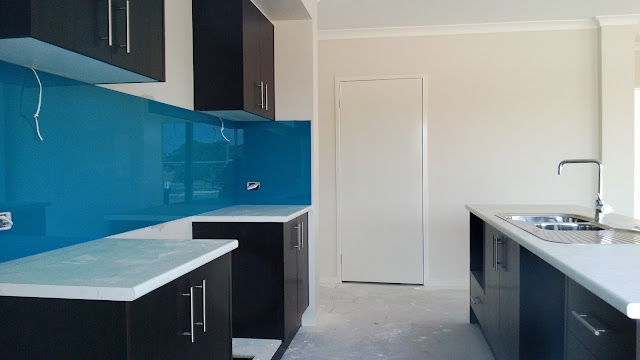 Good update from the site supervisor today - they've pushed a few things back, but some big progress items have also been completed.
They've held the carpenter back a week so he'll be installing carpets next week, and they're going to hold off a bit longer on the timber flooring - that will now be done at least the week after next or the following week again.
Plastering and re-painting has all been done - there'll be another layer of paint to be done over some areas but for the most part that's been fixed up.
Plumbing fit-off has been done, so there's taps throughout the house, and the first/base layer of the render over the Hebel was done today.  They usually give it three days before doing the second coat, so he's hoping that by Wednesday the house will be fully rendered and coloured.
Most importantly though the splashback is getting fixed up tomorrow, so come tomorrow afternoon we should have a nice blue glass splashback rather than the tile one that was installed by mistake.

Getting close now!
Posted by tjsr at 7:27 PM No comments: